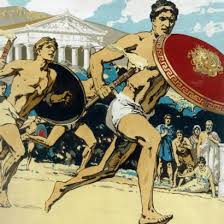 The history of steroids in sports began shortly before the 1954 World Weightlifting Championships, where the Soviets dominated most weight classes. According to legend, when asked by a doctor from the Soviet team what the secret of his team was, he replied that his athletes were receiving testosterone injections, which at that time were not yet prohibited by anti-doping rules. This was probably the first time someone has used anabolic steroids to improve athletic performance in competitive sports, or at least this was the first time it was officially confirmed.

However, it must be pointed out that in ancient times it was common to eat bull testicles to gain its strength, this form of doping is based precisely on the fact that the bull testicles contained testosterone, even if the ancients did not yet know it.

According to some unconfirmed sources, testosterone preparations were also used by the German Nazi Olympic team in 1936 for the Berlin Olympics.

Upon his return from these world championships, the American team doctor, Dr. Ziegler, immediately began researching testosterone, trying to develop something better for his athletes.

What Dr. Ziegler developed with the help of the pharmaceutical company Ciba was called Methandrostenolone oDianabol. It is the first form of an anabolic steroid created in addition to testosterone. From that moment, research began to develop more and more effective substances.

In subsequent years, the use of anabolic steroids among athletes became more widespread until the Olympic Committee for Ethical, Moral and Safety reasons was forced to ban them in 1972.

From that point on, steroid use in sports continued in a cat and mouse game between athletes and the doping committee. In fact, research institutes racked their brains to create new products that were less traceable in tests, while the committee was constantly looking for new tests to better track products. Obviously, in those sports disciplines where the test was not carried out, steroids and other drugs were used without fear at an increasing rate. In particular, in bodybuilding, the use of these substances is becoming increasingly “normal” even for amateurs.

Anabolic steroids are synthetic derivatives of testosterone. There are several possible modifications that can be made to the structure of testosterone to produce substances with different properties:

Alkylation at position 17. By adding carbon in this position, a substance with oral activity is obtained, since it is resistant to the metabolic action of the digestive system and liver metabolism, as a rule, it is precisely because of their greater stability that they exhibit greater hepatotoxicity. They also have a short half-life and increased anabolic effects (17α-methyltestosterone, oxymesterone, oxymetenolone, oxandrolone, methandrostenolone, fluoxymesterone, etc.).

Aromatic ring modifications. In particular, it is ring A, which can be modified to produce more anabolic and less androgenic substances. By suitable modifications, products are obtained which are not aromatized or to a lesser extent. By changing ring A, you can also get compounds that do not convert to DHT (1-methyltestosterone, fluoxymesterone, 19nortastosterone, mesterolone, stanozolol, methenolone, etc.).

Halogenation in different positions (2, 4, 9). Specific forms of modification are helogenation, that is, the addition of halogen (elements of the seventh group of the periodic table). These substitutions make the nucleus not convertible from either aromatase or 5α-reductase, since they change its size (fluoxymesterone, chlortestosterone, etc.).

Substitution at position 19; the removal of the methyl group on carbon 19 results in the formation of nortestosterone, also known as Nandrolon online, a substance with strong anabolic and low androgenic activity. Numerous other compounds (trembolone, norethandrolone, ethylestrenol, etc.) are derived from it. These substances have numerous advantages in that they do not aromatize, do not convert to DHT, and are slowly metabolized.

Replacement by different functional groups in different positions. Various compounds are obtained that are not a substrate for aromatase and 5α-reductase, therefore they do not convert to estrogen and DHT (drostanolone, methenolone, norboletone, etc.).

Esterification at the 17-OH position with various carboxylic acids. This modification makes the substances more lipophilic and allows a deposition effect to be obtained with prolonged release of the substance. The longer the side chain, the longer it will take for the active ingredient to be released, since in order to be active they must be hydrolyzed and detached from the chain. In particular, testosterone itself is esterified by different chains to obtain substances with different release times (propinate, undecanoate, enanthate, phenylpropionate, cypionate, etc.).

There are no synthetic steroids in the body, so they represent specific metabolites that can enter the urine and be monitored using tests that clearly demonstrate that the athlete has taken doping substances, therefore, the anti-doping test is carried out by looking for these metabolites. Testosterone, on the other hand On the other hand, it is a natural substance already present in the body, so it is impossible to determine whether its metabolites are endogenous or exogenous in nature, so the detection of illegal use depends on the ability to distinguish between endogenous and exogenous testosterone. To achieve this, the ratio of testosterone to epitestosterone is used.

In chemistry, two stereoisomers are defined as epimers that differ in the orientation of the substituents on the same stereocenter. Practice two molecules with the same molecular structure, but with a different spatial configuration, since the two groups are located differently. Therefore, epitestosterone is a substance similar to testosterone that is produced by the body.

Therefore, the Olympic Committee decided to establish a maximum threshold for this ratio, after which an athlete is considered doping. This threshold has changed over time, since the T / E ratio is not always the same for everyone, there are several factors that can affect it, such as the actual rate of epitestosterone production, which is not the same for everyone, and with the advancement of scientific knowledge in matter can change estimates. The current limit has been set at 4. So any value above 4 is considered doping.

To complicate matters, some athletes may mask the use of exogenous testosterone by simultaneously administering strong diptestosterone. In such cases, the exogenous use of epitestosterone is determined by high concentrations of its specific urinary metabolites.

In general, athletes who do not use steroids tend to have a fairly constant T / E ratio over time, so with consistent monitoring of the T / E ratio, any change could indicate illegal use.