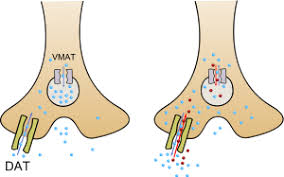 Amphetamines increase concentration, motivation and motor skills, reduce feelings of fatigue, prevent fatigue and reduce appetite. it is clear that these effects are needed in sports to win the competition, in particular in disciplines with anaerobic adherence, they give the best results, since more release of neurotransmitters also determines a greater ability to activate muscle contraction. Nerve hyperactivation guarantees a higher frequency of discharge of impulses at the level of the neuromuscular plaque, which leads to more energetic contraction and, therefore, the muscle generates more force. Therefore, disciplines with anaerobic adherence, where force of contraction is critical to the end result, benefit most from the properties of amphetamine.

Amphetamine use is accompanied by a period of mental depression and fatigue due to the high physical stimulation that occurs under the influence of these substances.

Amphetamines are excreted in the urine and can be recovered even 48 hours after ingestion.

They are considered substances of abuse, as they are used for weight loss, for study, for recreation, they are substances used in the party and in discos to get a high effect and dance all night because of the energy and contrast of fatigue. They are often associated with alcohol to enhance their inhibitory effects.

In addition to being linked to addiction risk, amphetamines have a wide range of side effects, ranging from behavioral. such as agitation, nervousness, insomnia, psychosis, etc., for physical, such as cardiovascular disorders, palpitations, tachycardia, heart failure, arrhythmias, dehydration, etc. They also have some neurotoxicity and can cause brain damage brain, since the excessive depletion of catecholamines in presynaptic receptors, which occurs after a large intake of amphetamines, can lead to the death of the neuron itself.

Amphetamines and all substances with similar activity are considered prohibited by anti-doping rules prior to competition. Obviously, due to the ergogenic actions and the possible risks associated with their recruitment, athletes cannot take these compounds before the competition, while using them at moments far from the race is useless, since the risk of overworking The body, pursued by the intake of amphetamines and derivatives, makes it counterproductive to use these drugs at times other than competition. For these reasons, stimulants such as amphetamines are only banned prior to competition.

The main research on the use of amphetamines (benzedrines) in sports dates back to the sixties, and these studies show that already low doses of these substances (14/30 mg) increase strength and endurance, whereas at high doses side effects escalate, and athletes become agitated, lose concentration and leave the body in a serious state of fatigue, which leads to decreased performance. Exactly what this dose is is unclear and may vary between subjects. It also appears that amphetamines do not improve physical performance at the aforementioned dosages (at least 14/15 mg).

If you are planning to go to the gym to get in good shape, we recommend the anabolic sustanon. Follow this link https://buysteroidsgroup.net/steroid-injections/testosterone/sustanon/ to see the full range.

To summarize, amphetamines are:

Amphetamines are well absorbed orally, so this is the most used recruiting method. Taken in accordance with this modality, they are absorbed by the intestines and reach their peak between 40 and 120 minutes, however, they are sometimes taken by the parenteral or nasal route (snort), in the first case the substance goes directly into the circulation, in the second it is absorbed from the epithelium of the lungs, and start time is reduced to a few minutes.

According to some statistics regarding the results of doping tests conducted between 2003 and 2007, positive amphetamine and its derivatives are increasing compared to other stimulants.