Phenylephrine is an α1-adrenergic receptor agonist, used primarily as a decongestant, as a pupillary dilator and to increase blood pressure, with very little effect on the central nervous system. This active ingredient is widely used for topical application in eye drops and nasal sprays, and is also present in many over-the-counter medications.

Phenylpropanolamine is a sympathomimetic amine structurally similar to ephedrine and amphetamine. It is commonly used as a nasal decongestant in combination with antihistamines, anticholinergics, antipyretic analgesics, caffeine and antitussives to treat chronic or acute rhinitis, colds, sinusitis, and allergic forms of the respiratory system.

Its action is: similar to ephedrine with less stimulation of the central nervous system, it also acts as an appetite suppressant and therefore is included in weight loss products. 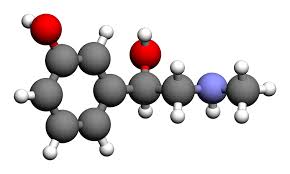 In the United States, in addition to drugs prescribed for the treatment of refrigeration, phenylpropanolamine is also present in over-the-counter weight loss drugs at a recommended dose of 75 mg per day.

In Italy, however, there are no weight loss products that contain the accused substance, but we find it in various medicinal specialties for the treatment of colds, albeit at a lower dosage than the specialties used as dimag in the United States. p>

Recent studies have shown a link between phenylpropanolamine use and the risk of hemorrhagic stroke within three days of starting treatment for nasal congestion, which is why many products containing phenylpropanolamine have been removed from the market.

Various studies show that taking this substance in doses even exceeding therapeutic doses does not affect the effectiveness, despite the fact that it is a mild stimulant, also for this reason it was included in the list of substances to be monitored. it is possible, however, that when taken with megadoses, its sympathomimetic effects are indeed capable of improving physical performance.

Pipradrol is a mild central nervous system stimulant and a catecholamine reuptake inhibitor used to treat depression, obesity and narcolepsy. It is currently not in use due to its side effects such as insomnia and anxiety, as well as its potential risk of abuse.

Synephrine is a sympathomimetic amine commonly used for weight loss purposes and is extracted from the unripe fruits of citrusaurantia (bitter orange). This substance selectively interacts with β-adrenergic receptors. With little activity in the central nervous system, this substance is of little benefit to athletes, or at least no one has ever isolated them. As a vasoconstrictor in therapy, it has been used for hypothetical patients as well as topical application in the form of eye drops, however there are currently no drugs in Italy containing this substance, even though it is found in several OTC supplements used for weight control. p>