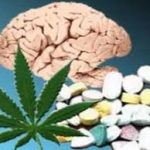 Cannabinoids are psychoactive substances produced by various plants, in particular from cannabis sativa, known for its recreational use. Cannabis contains hundreds of chemicals, of which about sixty are classified as cannabinoids. Chemically, icannabinoids are terpenoids , that is, non-polar molecules capable of interacting with specific receptors present in various regions of the brain. Therefore, cannabinoids […]